We are going to talk about film making courses in Bangalore in the Movie Studio at FLUX including short film, documentary films, film direction, cinematography, videography, video editing, sound editing, film lighting, script writing, film acting and more. But first let me ask you a simple question with an equally simple answer… 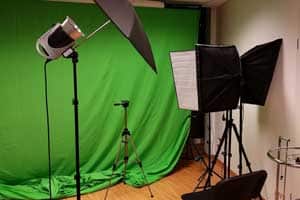 Do you love watching movies?

Did you ever wonder who makes them?

Of course, there are various different film production companies that are responsible for it.

Would you ever like to be a part of one among them?

Many of you would love the idea of owning or else being a part of a production company in Bangalore!

FLUX manages a film studio in Bangalore where we make short movies and documentary films.

A movie studio aka a film studio is a privately owned studio facility generally by a film production company along with equipment facilities used in making films.

There are others who never made a movie themselves as they are not film production companies but only the studio owners renting out their studios by the hours.

We do both of them. We also run film making courses for those who want to learn how to be a part of the film making process in any capacity.

Which one of the above do you think you would be interested in? 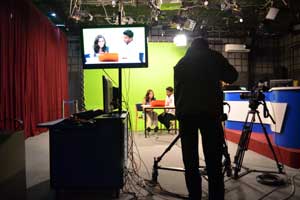 Have you ever watched a short film on YouTube?

People are making them quite interesting while creating an exciting graph that goes through all the climax and anticlimax properly packed in 10 short minutes.

Short film making is fast picking up in popularity. Though they are short in length and hence in budget, they do incorporate all the stages of film production and are the best source to learn the insight into filmmaking meaning and all the film production process steps.

But you can also opt for any other course out of documentary film making, film direction, videography, cinematography, video editing, sound editing, lighting, script writing for movies and film acting classes.

You cannot go wrong in choosing any one of these film making courses in Bangalore as each one has been packed with the total worth providing you the best return on your investment and involvement. 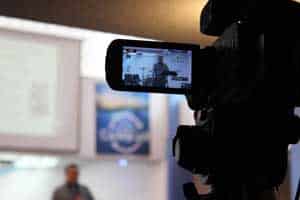 What is a short film?

A short film is a full-fledged film limited in its length for around a few minutes instead of hours which full length feature films are made for.

How to make a short film?

The process of making a short film is exactly the same as that of making a full length film with the only difference that the former one gets completed much faster in a considerably smaller budget to spend.

You must first come up with a few short story ideas and turn the best ones out of them into a short film story or two.

Once the stories are there, you need to turn them into short film scripts.

How to write a script?

You can write your own if you know how to create a story board, or else you can hire a screenwriter for the same. There is also script writing software available that can help you turn a story into a screenplay format.

Once your story board is ready, you need to do pre-production planning and make arrangements including getting all necessary permits to shoot at public and private places.

How to direct a short film?

Recruit crew, get the scenes rehearsed, arrange costumes and shoot the scenes.

Once the shooting is over, edit the film by uploading a movie editing software, add audio and review the film.

Make the final cut and your short film is ready! 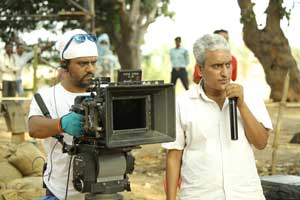 Good documentaries are equally, if not more involving than fiction films. It’s so because they are more convincing simply by the fact that they are real and not fictitious.

What is documentary film?

A documentary film documents reality through describing it and not through storytelling.

What is the purpose of a documentary?

The purpose of a documentary is to inform and educate through documenting reality.

What are the types of documentary?

How to make a documentary?

To make a documentary, you need to first decide your story, do some research about it, make a plan, create a shot list and then start shooting. Once you have collected enough video material, write a script and arrange your shots.

After all this is over, start editing it by uploading a video editing software. There should be no legal and copyright issues left unattended.

Your documentary is ready. You can distribute it now. 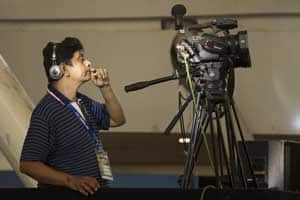 A film director is the person visualizing the movie artistically in her/his mind before getting it executed in front of the camera to be shot. By this token film direction is a highly imaginative pursuit.

The best movie directors are never very rigid in their approach to film direction and let the actors not only improvise their dialogues but also their movements and expressions. This way they are able to get the best out of their actors’ talents with their liberally creative approach to film direction. In fact they provide this creative freedom to their entire crew and keep a creative watch on the outcome of the scene.

The best film directors don’t only take care of the film direction but also always keep a close liaison with the film producer along with the executive producer in order to keep a watch on the budget if it ever tends to cross its limits.

Salary for film direction is quite lucrative especially if one is among the famous film directors with their audience.

Videography Courses in Bangalore Indiranagar in the Movie Studio at FLUX 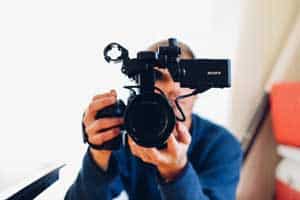 Do you have a personal videography camera with you?

Many people have it these days.

Videography is the art of capturing moving images on electronic media. We may call it the video equivalent of cinematography.

Photography is a general term involving capturing both still and moving images either digitally or chemically. In this sense it incorporates both videography and cinematography in its folds.

Cinematography is not a videography synonym. Videography is much smaller in its stature. A cinematographer works with a much larger crew as the director of photography in accordance with the director’s creative vision than a camera operator who actually works according to her/his instructions.

On the other hand a videographer works with a much smaller crew and operates her/his own camera overseeing the entire process from start to finish.

What would you like to become, a videographer or a cinematographer?

Read on: Videography Courses in Bangalore Indiranagar at FLUX

Cinematography Courses in Bangalore Indiranagar in the Movie Studio at FLUX 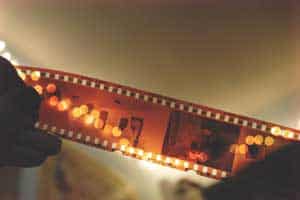 A cinematographer is essentially the director of photography in a movie. She/he is responsible about the aesthetics of photography including lighting, camera angles, framing, duration of shot, distance, and movement.

That’s what the difference between cinematography and videography is. A videographer working with a much smaller crew operates her/his own camera whereas a cinematographer has a cameraman appointed for the job so that he may attend to his overall cinematography/photography direction in a more focused way.

Read on: Cinematography Courses in Bangalore Indiranagar at FLUX 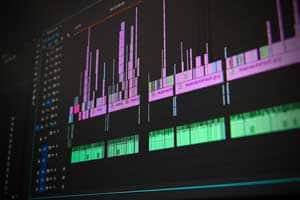 Video editing rearranges as well as tweaks video shots in movies, TV shows, video ads and documentaries. It cuts video segments, resequences clips and adds special effects including transitions in between them.

The best video editor with music is without doubt Adobe Premiere Pro.

You may like becoming a video editor if love to work on your own alone in the most intensive way.

Read on: Video Editing Courses in Bangalore Indiranagar at FLUX 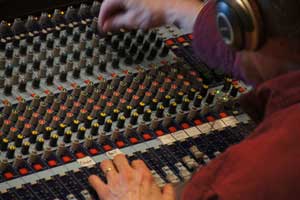 Do you love the world of sounds and music?

If you do, sound editing is what you should go for.

Once the collection work is over, these are combined in order to create the final mix named as the soundtrack of the movie.

Wavepad Audio Editor and Audacity are the two best software programs for sound editing in order to create the final sound track. Finally, Adobe Premiere Pro has the provisions to sync the video track and the sound track and lock them together.

What are Sound Editing Oscars?

Sound editing is an important and a highly technical aspect of movie making. That is why there is a provision of the Academy Award for best sound editing in a movie every year.

Be a part of the world of sound in a movie! 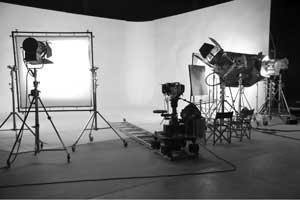 The world of light is as bright as life and its depiction in a movie is!

Cinematography techniques include a lighting plan based on lighting techniques in film created by the cinematographer, the director of photography in consultation with the film director’s visualization and ideas for cinematic lighting.

Types of film lighting highlight a specific part of a scene in its frame, speak about the psychology of characters as well as underline the genre of the movie.

Light speaks visually what sound does through the ears!

Are you a visually oriented individual or an auditory person with musical ears at your disposal?

Choose one out of the two and be an expert in that field!

Read on: Film Lighting Courses in Bangalore Indiranagar for Film Making at FLUX 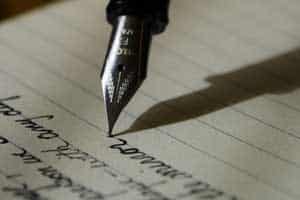 Writing is an art and there are some who are extraordinarily good at it as it comes to them naturally.

It’s a single person job, hence it can easily be done as a freelance profession.

Are you one of those gifted people?

Script writing aka screenwriting is the art of writing scripts for films, television programs or video games.

How to write a script for a movie?

First of all, you must have an idea for a story. Once you have it, get a script writing template and write it according to the script writing format.

Script writing basics outline the elements of audio, visual, behavior and dialogue to tell a story through a film.

How to write a script for a short film?

If you have a flare for writing in your mind, you must develop it to as great a length as you can. That is how you can be a great artist in demand! 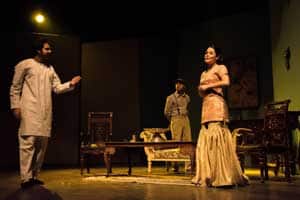 Do you feel you have the talent of film acting in your personality?

If you really feel so, you must take steps to develop this talent of yours to its full potential.

Actors and actresses who learn film acting through such training procedure also need to go beyond mere emotional memory. In fat they need to learn the substitution technique. It enables them to forget who they are and temporarily turn into the character they are portraying.

Once you have learned the method acting well, you are an expert in film acting. In that case all the doors to unlimited lucrative opportunities open up in front of you.

Read on: Film Acting Classes in Bangalore Indiranagar at FLUX

If you have any questions, you may get your answers here: FREQUENTLY ASKED QUESTIONS